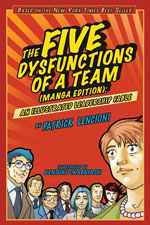 Comics are being used increasingly to get messages across visually, even those aimed at the business world.

Doug Jackson, a Tokyo-based business consultant, was involved in adapting Patrick Lencioni’s “The Five Dysfunctions of a Team” into a “manga version.” He talks to Tim about the challenges he faced in turning Lencioni’s “business fable” into a comics script, and the potential for using sequential art as a teaching tool.

Grant Brownrigg of Grantland.net sells usage rights to his business-themed comic strips and one-panel cartoons through the site, for use in everything from newsletters to presentations. He tells Tim about how the business started in 1984 and how it has evolved.