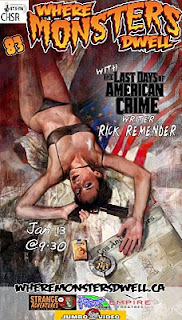 This week Where Monsters Dwell is proud and honoured to announce our guest; Rick Remender! He is the writer/co-creator of comics such as Last Days of American Crime, Doctor Voodoo: Avenger of the Supernatural, Fear Agent, The End League, Crawl Space and Doll and Creature and has also written titles such as Punisher War Journal, Booster Gold, The Atom, Red Sonja, Battlestar Galactica, and What-If?

He served as an animator on films such as The Iron Giant, Anastasia, Titan A.E., and Rocky and Bullwinkle, and also severed as director and on the cartoon series Swing Town that he co-created.

In addition to our guest, we’ll be finally drawing the winning name for the Jumbo Video Holiday Prize Pack and giving away some Strange Adventures gift certificates.

Remember: you can listen LIVE anywhere in the world at wheremonstersdwell.ca.

Hope to hear from you then,

Mike, Remy and Ryan
from Where Monsters Dwell