Sean joins Derek to interview a creative team that the two have discussed previously, Ryan O’Sullivan and Plaid Klaus. Last year the guys reviewed Ryan and Klaus’s webcomic Turncoat (now available in softcover), but this time they talk with the creators about a new print publication, their Image Comics limited series Void Trip. The first of its five issues comes out this week, and the Two Guys talk with Ryan and Klaus about the genesis of this project, the psychedelic nature of the story, the dynamics of their collaboration, and their philosophies on self-contained and tightly woven narratives. They also talk with the creative duo about their previous work together, Turncoat, and any potential future plans to utilize the webcomics platform.

We cover Turncoat from Boom Studios in this episode. This comic is a great look at the effects of colonialism on the common man set in a sci-fi dystopian world. Creators Alex Paknadel and Artyom Trakhanov do a great job with this 4-issue series telling a compelling tale and giving us lots to talk about. 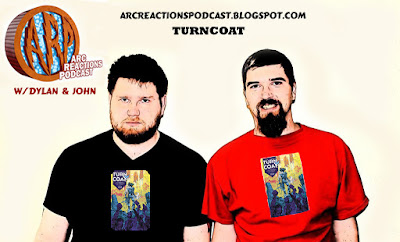 Our next podcast will be our review of the Spider-Man Homecoming film on July 9th.

“There’s a lot of Bone today”

On this month’s webcomics show, Sean and Derek discuss three relatively fresh titles. They begin with Lho Brockhoff’s The Lost Oracle, a webcomic that began in July 2015 and is just into its third chapter. This is a fantasy about a young girl, Amra, raised in an abandoned city and longing to see the world beyond. Yet, unbeknownst to Amra, some on the outside are seeking her, as well, and it’s not entirely clear what this quest will have in store for the innocent protagonist. Next, the guys take a look at a completely different kind of quest, one involving a minstrel skeleton and a talking lump of goo. In Rickety Stitch & Gelatinous Goo, Ben Costa and James Parks create one of the weirdest buddy narratives you’re likely to encounter. Their mixture of humor, adventure, and dark overtones make this webcomic stand out in ways that others haven’t. Sean notes that the art and tone of Rickety Stitch, as well as that of The Lost Oracle, are reminiscent of Jeff Smith’s epic Bone (in fact, Bone gets

a lot of love on this month’s episode). Costa and Parks have recently announced that their larger trilogy will begin being published next year by Knopf, and the portion of the narrative that is now available appears to be the core of that first volume. Finally, Sean and Derek wrap up with a different twist on the superhero story, a genre that the Two Guys rarely investigate. Ryan O’Sullivan and Plaid Klaus’s Turncoat is a short and contained webcomic — running between August 2015 and March 2016 — about a mercenary group of villains who are hired to thin out the superhero population. It’s protagonist, a malcontent name Duke, is short on generating reader appeal. However, as Derek points out, his saving grace is his pathetic nature, a character trait that generates at lest a modicum of sympathy. And while there’s still time, you can get on board O’Sullivan and Klaus’s Kickstarter campaign that is bringing out Turncoat in hardcopy format.

ALSO: The guys remind listeners about their online demographics survey. Go to their Libsyn survey webpage, and fill out the short six-question questionnaire. If you include your email address, you’ll be entered in a drawing to win an official Comics Alternative t-shirt when they are printed up later this year!

Comic News Insider: Episode 672 is now available for free download! Click on the link or get it through iTunes! Sponsored by Dynamic Forces.

Jimmy is joined in studio by regular guest co-host Emily Edwards! They chat about the new Daredevil S2 trailer, Jimmy doesn’t understand the current X-Files season and Emily doesn’t get Doctor Who. News includes: Frozen is coming to Broadway, Star Wars 8 is in production with new cast members, The script for the new Harry Potter play (NOT the 8th book) is being released in July, a new Star Wars animated series called The Freemaker Adventures is on the way,  Kevin Smith and Greg Grunberg will be hosting a new talk show called Geeking Out, Archie horror comics are returning, and a new Spawn film is in the works. Leave your iTunes comments! 5 stars and nothing but love! Also, get a hold of us!