Get ready to celebrate the 4th anniversary of Comic Book Central! It’s my annual treasury-sized travel back over the past year to revisit some of the most memorable moments on the show. Guests from the worlds of Superman, Star Wars, Star Trek, DC and Marvel TV shows and movies, MST3K, Lost in Space and much MORE!      http://comicbookcentral.net

NEW EPISODE! (Click that “SHARE” button!)
Celebrating the 25th anniversary of the feature film, The Rocketeer! Danny Bilson and Paul De Meo are in the Lair to talk about adapting Dave Stevens’ classic comic book character for the big screen. The dynamic duo also chat about creating the 1990 TV series – The Flash!
http://comicbookcentral.net
Subscribe to the show in iTunes
Subscribe to the show on Blubrry
Listen to the show via Stitcher
“Like” Comic Book Central on Facebook
Follow Comic Book Central on Twitter
email: joe@comicbookcentral.net

So this week Dave, Ben, John and Pete sit down and discuss some of the latest casting news. Including Mark Hamill returning to the role of the Trickster, the cast of Suicide Squad and Ryan Reynolds is officially Deadpool. Also with only their 2104 wrap up show left to go, they name the Geek of the Year this week! They also officially say goodbye to Dustin, we wish him well, and he will be missed. So sit back and enjoy! 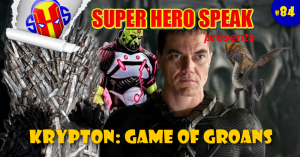 #stumpthegeekspeak question from last week: Where was George Lucas during the premier of Star Wars in 1977?

Answer: He was in Hawaii with Steven Spielberg coming up with the idea for Raiders of the Lost Ark

And the winner is Dave the Nerd! Congrats you are the geek of the YEAR! Thanks for being a loyal fan!

#stumpthegeekspeak bonus question: What is the link between Apollo 13 and the Fantastic Four?

In this special Comic-Con 2012 episode, I’m joined again by Matt (Duke of Douche) and Darcy (The Destroyer) to recap Friday and Saturday of the convention. We talk about the Nerdist Live show, TR!CK2TER, and My Little Pony. WARNING: EXPLICIT CONTENT!

In this special Comic-Con 2012 episode, I’m joined by Matt (Duke of Douche), Darcy (The Destroyer), and Nic Fury to recap Preview Night and Thursday night of the convention. So far we’ve been enjoying the parties, the beers, and the friendly atmosphere. WARNING: EXPLICIT CONTENT!

In this episode I recap my second day at the Emerald City ComiCon in Seattle. Sci-Fi Speed Dating, locating the secret TR!CKSTER bar, and seeing artists paint on naked people.

This episode has been brought to you by Crazy Mary!

In this special episode I’m joined by Jeremy Awesome, The Duke of Douche, and Darcy the Destroyer to recap what we saw on Thursday at Comic-Con 2011. Warning: we make a lot of bad jokes on porpoise.

This episode has been brought to you by, 01 Publishing!

In this special episode I’m joined by Jeremy Awesome to discuss Preview Night of Comic-Con 2011. We talk about TR!CKSTER, the different video games we played, and what we saw in the main exhibit hall.

This episode has been brought to you by, 01 Publishing!

Comic News Insider: Episode 332 is now available for free download! Click on the link or get it through iTunes! Sponsored by Dynamic Forces.

Jimmy is out at the bar and who better to join him for drinks and hosting than Grace Helbig! You remember when she and her comedy partner Michelle co-hosted back in Episode 323. We bring a little bit of Grace’s web show, The Daily Grace, to the podcast as well! They chat about some TV season finales, the Smallville series finale, Bryan Fuller in town and drinks! We also plug a new show called Planet Bugle coming soon to a TV near you! News includes: the official Castle comic book, new Wonder Woman TV show is not picked up, Seth MacFarlane to re-vamp The Flintstones, Trickster comes to SDCC, and a Batman first-person shooter! As always, the Top 3, listener feedback and more! Leave your iTunes comments! 5 stars and nothing but love!

Recorded live at Betti Bar on the 2nd floor of The Hourglass Tavern in NYC. 46th st. b/w 8th & 9th aves. If you’re ever in the hood, swing by for a great time! Thanks to Josh and Beth! (And our bartender Alana!)