Comic News Insider: Episode 801 is now available for free download! Click on the link or get it through iTunes! Sponsored by Dynamic Forces.

We’re back to normal shows! And Jon Hoche returns to co-host! The boys talk about the new Tomb Raider and Black Widow…I mean Red Sparrow trailers and Jimmy thanks everyone for the awesome 800th episode recording. Producer Joe sat down with author Dan Poblocki to chat about the release of his 3rd book in his Shadow House trilogy. News includes: Ed Piskor is creating X-Men: Grand Design remixing years of X-Men continuity, Daniel Dae Kim replaces Ed Skrein in Hellboy, Terry Moore’s Strangers in Paradise is coming to the big screen, DC’s Ragman is getting an upgrade, and more! Leave your iTunes comments! 5 stars and nothing but love! Also, get a hold of us!

Comic News Insider: Episode 615 is now available for free download! Click on the link or get it through iTunes! Sponsored by Dynamic Forces.

Due to a crazy schedule before leaving for Heroes Con this weekend, Jimmy has to do a quickie solo episode. Down at Heroes Con, Jimmy will be moderating both the DC Comics and Image Comics panels. And, he’ll be getting as many interviews as he can, as per usual! LOADS of reviews from comics, TV and film this week. News includes: Titan Comics will publish comics based on the upcoming NBC series Heroes Reborn, Fox animation has picked up the rights to Noelle Stevenson’s Nimona, The Simpsons showrunner Al Jean clears up the Homer/Marge split story for the upcoming season 27, Chiwetel Ejiofor has been cast as Baron Mordo in the upcoming Doctor Strange film, Starz has greenlit Neil Gaiman’s America Gods, E3 news and more! Leave your iTunes comments! 5 stars and nothing but love!

Comic News Insider: Episode 518 is now available for free download! Click on the link or get it through iTunes! Sponsored by Dynamic Forces.

It’s our Favorites of 2013 special! We don’t say “Best of” because whom are we to say what’s best? Oh yeah, WE’RE COMIC NEWS INSIDER! Still, call it what you will, it’s our best/favorites/what we liked for 2013 in comics, TV, film and more. Jimmy is joined in studio by The Beat’s Heidi MacDonald, Erika Schultz (M3), Mike Cho and producer Joe Gonzalez. It’s a great, lengthy chat so strap in! Leave your iTunes comments! 5 stars and nothing but love!

Christmas Craziness has ensued! We have no idea what we’re talking about!

Possibly the last episode of the year…. But not guaranteed!

Reality TV hosts are just there to do the math

G Money sweats it out at the cinemas

–          Jerks who arrange plans and then cancel them without telling you

–          South Park: Stick of Truth STILL being censored in Australia

–          Will Dennis and Mark Doyle leave DC/Vertigo editorial next year

Well this is quite the interesting scenario. And by interesting I mean, potentially horrible. G Money will of course be back for the next show, but no point in denying the inevitable, let’s get to it!

SUPANOVA is a mere few days away!!!

Gerard Depardieu’s car crash (not a movie or anything, a literal car crash)

South Park: The Stick of Truth 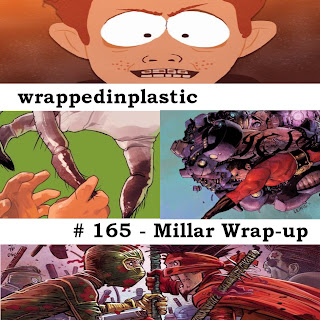