We cover Dark Night: A True Batman Story by Paul Dini and Eduardo Risso. This story covers the true story of Paul Dini’s mugging and how he used Batman and his associated characters to help him recover from that tragic event. 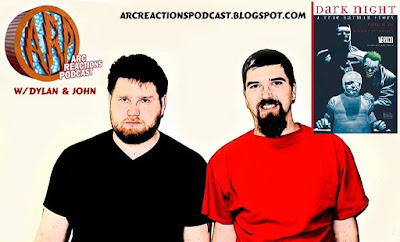 Our next podcast will be our review of Jessica Jones Season 2 on April 8th.

This week Paul and Derek review three new titles that are all quite different in content and audience. They begin with the first two issues of Peter Milligan and Tess Fowler’s Kid Lobotomy, the first series in IDW’s new Black Crown imprint. The guys start their discussion by referencing Shelly Bond and her stated intentions behind the new creator-owned line. But while they’re certainly amenable to the edgy or punk mentality that had once defined Vertigo, the guys feel that in her commentary in these first two issues, Bond is trying a little too hard to be hip and get us on board. And while both Derek and Paul are fans of Milligan’s storytelling, there’s something a little too much, something too crowded or unwieldy, about the premise of Kid Lobotomy. Nonetheless, given the creative team on this title, and its place in the new Black Crown line, the guys are going to give this series a lot of rope in hopes of being won over.

Next, the guys discuss Carnival of Contagion, a new educational comic from the University of Nebraska Press that’s all about vaccination awareness. Illustrated by Bob Hall, and written by him as well (along with John West and Judy Diamond), this is a title that’s apparently intended for classroom use. As Paul and Derek reveal, the story may be a little dry — and even didactic in places — but it effectively drives home the importance of vaccination not only for individuals, but for our communities as well.

Finally, the Two Guys turn to a behemoth of a text, Chris Ware’s Monograph (Rizolli). Both Derek and Paul are big fans of Ware’s creativity, and they’re mesmerized by the sheer beauty and ingenuity contained within this work (which is much more of an art book, and one with autobiographical impulses, than a comic). However, they’re a little put off at times by the apologetic tone of the author. Granted, Chris Ware is known for his self-deprecation, where he feels he has to apologize for his comics efforts as an artist. But such a stance can also take on a more self-aggrandizing quality, highlighting the uniqueness — and the “seriousness” or the high-brow-ness — of the project and contrasting it to more “common” or mainstream comics. This can also be seen in Art Spiegelman’s introduction and his emphasis on “comix.” But despite these minor annoyances, the guys are completely taken by this volume and strongly recommend it to not only Chris Ware fans, but to serious comics readers as a whole.

Comic News Insider: Episode 746 is now available for free download! Click on the link or get it through iTunes! Sponsored by Dynamic Forces.

Jimmy is joined in studio again by the Jon-uary co-host, Jon Hoche! The boys discuss the nerdy Oscar nominations and what of those they’ve seen/need to see. News includes: DC Comics is raising prices of select comics to $3.99, Star Wars Episode VIII will be titled The Last Jedi, Sony’s untitled animated Spider-Man film will feature Miles Morales, Harley Quinn will make an appearance in Gotham at the end of the current season, there will now be a Black Adam film (starring Dwayne Johnson) along with the previously announced Shazam! film, Witchblade will get a second shot at a TV series, M. Night Shyamalan has announced his next film will be a sequel to his 2000 superhero film Unbreakable and more! Leave your iTunes comments! 5 stars and nothing but love! Also, get a hold of us!

Comic News Insider: Episode 452 is now available for free download! Click on the link or get it through iTunes! Sponsored by Dynamic Forces.

Jimmy went out to New Jersey for Christmas and the plan was to record with his sister and brother-in-law. Alas, due to sleep schedules, company, shopping, gift wrapping, etc…it didn’t happen. But you get this express Xmas quickie from Jimmy solo! He had an amazing Xmas with the fam! You may hear a few special holiday related bits in the show as well. News includes: Gail Simone re-hired on Batgirl, Star Wars comics coming to Marvel in 2015, Shelly Bond is promoted to new Vertigo Executive Editor, BBC America picks up Nerdist, and Glen Mazzara bugs out on The Walking Dead. Here’s wishing everyone who celebrates it the happiest of Christmases! As always, listener feedback, Top 3 and more! Leave your iTunes comments! 5 stars and nothing but love!