It’s a double-header episode again this week, as #269 features my interview with writer Charles Soule and artist Alberto Alburqueque, who are bringing their excellent Oni Press series Letter 44 to a conclusion soon! We go behind the scenes to talk about how this book came to be, how they’ve been bringing individual issues our way, and what we can expect as the comic comes to what I’m sure will be a shocking ending in the next couple of months ahead. For more on this book, go to this link. To follow Charles, go here on Twitter, and to keep up with Alberto, here’s the place to go!

Then everything concludes with the return of Sam Johnson, who updates us on his Geek-Girl comic, among other things! The third issue is now available, and we talk about how this is the perfect time to jump on board because Sam’s included a recap for new fans! We also preview the upcoming fourth and concluding issue in this miniseries as well as what the future holds for Sam and this most “human” of super-human comics! For more about Geek-Girl, go to this link! You can follow Sam here to keep up with what he’s creating!

Damian, of the world-renowned sleepyreader666 YouTube channel, joins me to discuss our top 5 current favorite independent comics (plus a few more).

Please send your comments to longboxreview@gmail.com, chat with me @longboxreview on Twitter, or visit longboxreview.com. Please also subscribe, rate, and review the show via iTunes.

On this episode the Two Guys get a kick out of talking with Charles Soule and Ryan Browne. The first issue of their new series Curse Words will be released on January 18, but the guys wanted to have them on The Comics Alternative this early December so that they can encourage listeners to preorder that issue before the December 19 cutoff date. In this interview, Andy and Derek talk with the creators about their offbeat Image series and what went into creation of such an unusual narrative world. Both Ryan and Charles have been on the podcast separately before — Ryan talking about God Hates Astronauts and Charles for his Letter 44 series — but getting the two of them together for one interview is like combining unstable chemicals. And the conversation reveals this kind of wild volatility as the creators discuss the genesis of Curse Words, the history behind their collaborative efforts, and the wackiness planned for the series…including a van tour to promote the comic this summer. Ken Kesey and the Merry Pranksters will have nothing on these guys.

Be sure to keep up with all of the hullabaloo at the official Curse Words website!

On this episode of the interview show, Derek talks with Charles Soule about his most recent creator-own works, specifically Strange Attractors (Archaia) and the currently ongoing Letter 44 (Oni Press). They spend most of their time discussing the latter and the various narrative threads and subplots interwoven within the series. In their conversation, Charles tells Derek about the extent of his research for the title, his love of NASA history, the intrigue of writing political drama, and the

ways in which his background in law helped give birth to series’ premise.  They also discuss the contemporary rootedness of Letter 44 and the extent to which recent presidential history plays out in its storyline, albeit ramped up and taken to speculative extremes. Much of the conversation is also devoted to Strange Attractors, a book similar to Letter 44 with a high concept and a keen scientific bent. Charles explains how his interest in complexity theory and his love of New York City combine to create an unlikely sci-fi drama. But even though Derek is mostly interested in his non-mainstream work, he nonetheless asks Charles about his efforts in the DC and Marvel Universes — e.g., his experiences writing Swamp Thing, Death of Wolverine, Superman/Wonder Woman, and She-Hulk — how he balances the superhero narratives with his creator-owned work, and the ways he negotiates both franchise limitations and fanboy expectations. All in all, it’s a fun interview, with listeners being able to hear about creative facets of Charles Soule that rarely surface in other interviews. 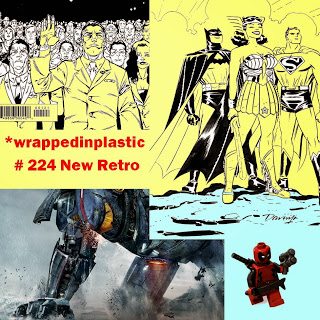