Dylan and John cover Baker Street Peculiars from Kaboom studios. We talk about the good, the bad, and the incarnations of Sherlock Holmes that we have seen and read. 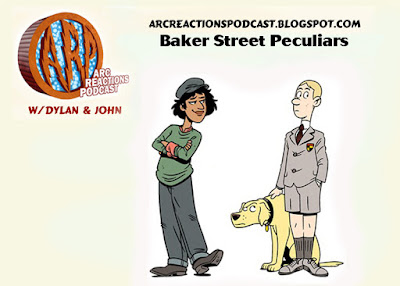 Our next podcast will be our review of the Wonder Woman film on June 3rd.

e would like to thank Packie Wambaugh for recording our intro and outro music for us.

This episode we discuss the upcoming JIM HENSON’S THE DARK CRYSTAL TALES and the new comiXology digital exclusive series – EXPANSE from BOOM! Studios.

Diving in to new books, we discuss two great crossovers – PLANET OF THE APES/GREEN LANTERNS #1, and BIG TROUBLE IN LITTLE CHINA/ESCAPE FROM NEW YORK #5. Plus we get caught up on THE WOODS with issue #29.

This episode I do a quick rundown of everything out this week from BOOM! Studios, Archaia, BOOM! Box, and KaBOOM! I hope everyone manages to pick up a few of these greats books this week. I briefly go over some of the new series starting in January while looking over the new Previews catalog solicitations, and a real quick look at next week’s upcoming WWE: THEN. NOW. FOREVER #1 one-shot from BOOM! Studios and WWE. I will definitely be going more in depth on this issue in the next episode.

You can check out preview pages of all of the books talked about in this episode here on the site, too, by checking out THIS PAGE.

As always, be a part of the show by leaving comments below or hitting me up on Twitter.

The show is back, but what does that mean? What can you expect from the new show? All of that is answered inside this show… sort of.

What you will hear is a rundown of everything coming out this week from BOOM! Studios.

You can check out preview pages of all of the books talked about in this episode here on the site, too, by checking out THIS PAGE.

As always, be a part of the show by leaving comments below or hitting me up on Twitter.

Comic News Insider: Episode 722 is now available for free download! Click on the link or get it through iTunes! Sponsored by Dynamic Forces.

Jimmy welcomes back Emily Edwards in the rotating co-host chair! They chat about Jimmy’s lame Pottermore patronus and go over some of the NYCC coverage he plans on getting. News includes: a penguin named Penguin will be joining Winnie the Pooh in a new story, an untitled stand alone Star Wars film is set for a 2020 release, KaBOOM! will publish The Deep by Tom Taylor/James Brouwer and Amazon’s The Tick has been picked up to series. Leave your iTunes comments! 5 stars and nothing but love! Also, get a hold of us!

Comic News Insider: Episode 689 is now available for free download! Click on the link or get it through iTunes! Sponsored by Dynamic Forces.

Emmy Potter returns to he rotating co-host chair. Jimmy briefly mentions the Gotham and Agents of SHIELD finales, the Preacher press day he attended and they both swoon over the much viewed Beauty and the Beast trailer. News includes: ComiXology introduces new subscription service ComiXology Unlimited, Afterlife With Archie returns after a year long hiatus, the Riverdale live action TV show will be dramatic and very CW according to the recently released synopsis, and the CW powers that be promise a 4 part crossover between newly acquired Supergirl with Arrow, The Flash and Legends of Tomorrow. Leave your iTunes comments! 5 stars and nothing but love! Also, get a hold of us!

Comic News Insider: Episode 669 is now available for free download! Click on the link or get it through iTunes! Sponsored by Dynamic Forces.

Jimmy is joined in studio by frequent co-host/possible State Fair singer Emily Edwards! They survived the big blizzard and chat about the Suicide Squad trailer and that great Wonder Woman film footage. News includes: Steven Moffat to quit as Doctor Who showrunner, a Labyrinth sequel is in the works, yet another DC Comics relaunch may be coming in June, and a Star Trek convention is coming to NYC for the 50th anniversary. Leave your iTunes comments! 5 stars and nothing but love! Also, get a hold of us!

Chris goes solo with this episode and when he’s left to his own devices things can get… scary.

This episode Chris goes over a little bit of news, covers KLAUS #1, UFOLOGY #6, ROWANS RUIN #2, THE WOODS #17, and briefly touches on JOHN FLOOD #4, TOIL AND TROUBLE #3, and mentions HACKTIVIST #4 by name! Yeah. That happened.

We’re always looking for your thoughts on the books we read and the books you’re reading. So, be sure to comment below and let’s talk about it!

In previous episodes of the show Ed and Chris have wondered what exactly a designer does at BOOM! Studios. Well, we wonder no more as we’re joined by one of BOOM! Studios’ own Production Design Manager – Scott Newman. Scott takes us through what exactly he and the rest of the design staff do when working through the creative process of designing for the comics BOOM! publishes as well as gives listeners a better understanding of the growth and changes design is making on the comics we see on the shelves every week.

This episode we are joined by BOOM! Studios’ Founder and CEO – Ross Richie. We talk about comics, BOOM! Studios’ ten years, and Push Comics Forward. Ross also shares his holy grail of comics – can you guess what it is?

If you’re interested in finding out more about Push Comics Forward be sure to follow #comicsforward on social media.

Music: “BOOM BOOM” by Big Head Todd and the Monsters

Comic News Insider: Episode 580 is now available for free download! Click on the link or get it through iTunes! Sponsored by Dynamic Forces.

Last minute guest co-host cancellation so Jimmy flies solo this week! Been awhile since you’ve had him all to yourself SO ENJOY. News includes: Star Wars 7 gets a subtitle, Howard Shum has a great new Kickstarter, Evil Dead TV series is on the way, CM Punk to write a story in Thor annual, Doctor Doom character change for upcoming Fantastic Four remake, IDW to publish new Jack Kirby book, John Lasseter to direct Toy Story 4, hundreds of retro games free online, and Mark Wahlberg will the 6 Billion Dollar Man. Leave your iTunes comments! 5 stars and nothing but love!

This episode we talk briefly about the recently announced series “Black Market” from writer Frank J. Barbiere and artist Victor Santos. We remind everyone that Chris is still pining away for the Emerald City Comic Con variants. And then we jump into reviews!

We wrap up the show looking at new series launching in June and what’s hitting the shelves this week and next week.