There’s perhaps no better historian on American comics fandom than Bill Schelly. Having been a part of the zine scene in the 1960s and early 1970s, and starting when he was a teenager, Schelly worked with many of the movers and shakers within the fan community and published several fanzines of his own. In the early 1990s he returned to comics as a chronicler and as a historian, writing various overviews of comic fandom, and then later making his mark as a comics biographer, covering the lives of such creators as Joe Kubert, Otto Binder, John Stanley, and Harvey Kurtzman, the latter biography earning him a 2016 Eisner Award for Best Comics-Related Book. On this interview episode, Derek talks with Bill about his new book, Sense of Wonder: My Life in Comic Fandom – the Whole Story, and his decisions to revise and expand this memoir from its original 2001 version released through TwoMorrows Publishing. This new edition of Sense of Wonder, published by North Atlantic Books, is significantly expanded, covers Schelly’s entire life up until now, and is written with a much more personal, and revealing, tone than the original. Bill discusses in detail his history in comics fandom and his growth as an editor and writer, as well as the personal milestones that have marked his life.

You can learn more about Bill Schelly and his work by checking out his website.

This week, Derek and Andy W. discuss recent titles that span the genre spectrum. First they look at the new release from Dark Horse, the English-language release of Claudio Nizzi and Joe Kubert’s Tex the Lonesome Rider. Based on the famous American Western character created in 1948 by Giovanni Luigi Bonelli, this book was originally released in Italian and is now being published in the states in a beautiful hardbound volume. (Dark Horse had released the first part of this story in 2005 as Four Killers, Vol. 1: The Bartlett Brothers, and that same year SAF Comics published the entire story in English, but those books are long out of print.) The guys approach Nizzi’s treatment of Tex Willer as a classic Western, but one that isn’t afraid to delve into the darker, violent side of the genre. In fact, Andy argues that much of the story, underscored by Kubert’s art, owes a debt to noir narrative, and that one could arguably read this as Western noir. Although Tex is a famous figure in Italian comics, he is much less known in the United States, and indeed, both Derek and Andy admit that before this new release, they didn’t know much of anything about Tex and his history.

But Tex the Lonesome Rider is the prefect introduction to the character, meticulously rendered by the legendary Kubert, and the guys hope that there will be more translated Tex stories to come. Next, they review the new collection from Peter Bagge, Sweatshop (Fantagraphics). Although this book was just released, Sweatshop isn’t a new comic. It was first serialized by DC Comics during the last half of 2003, but it was canceled after only six issues. Now, the short-lived series is finally collected in a trade paperback, and if you’re not familiar with the work of Peter Bagge, then this would be the prefect place to start. Reminiscent of Bagge’s classic Hate, the story revolves around a self-centered and crotchety newspaper cartoonist and the young people he has working for him on the strip. Illustrated not only by

Bagge, but also by Stephen DeStafano, Johnny Ryan, Stephanie Gladden, and Bill Wray, Sweatshop is a humorous, and at times sarcastically biting, look at the comics industry and the personalities that strut across its stage. Finally, Andy and Derek leap into Ed Brubaker and Sean Phillips’s Criminal Special Edition (Image), a one-shot oversized comic that takes us back into the creators’ seminal world of noir. Released to help draw attention to the new editions of Criminal published through Image — the original series came out through Marvel’s Icon imprint between 2006 and 2011 — this special edition is also an homage to the kind of sword-and-sorcery magazine-sized comics that appeared in the 1970s. The result is not only a curious pairing of genres, but more significantly, a narratively sophisticated return to a noir world that would eventually lead to such titles as Fatale and The Fade Out. If you’re a fan of crime comics, Criminal Special Edition is essential reading. 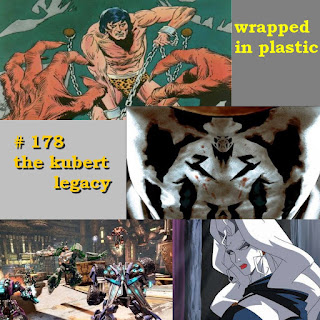 Comic News Insider: Episode 430 is now available for free download! Click on the link or get it through iTunes! Sponsored by Dynamic Forces.

The final San Diego Comic Con interviews are in! We think…Roving reporter Melissa attended the roundtables for the upcoming show Revolution and chatted with stars Billy Burke, Giancarlo Esposito, J.D. Pardo, Tracy Spiridakos and creator Eric Kripke. She also attended the “Black Carpet”  for The Walking Dead while out there covering for both CNI and Outside Comic Con (Thanks to Kim for access!) and chatted with stars Danai Gurira, Lauren Cohan, Steven Yuen, creator Robert Kirkman and ABC TV Scandal star Guillermo Diaz. The sound for the interviews isn’t great but still lots of good content! Wear your forgiveness headphones and enjoy! Jimmy flies solo due to last minute cancellation from  Stan Lee   Jim Lee   Jae Lee   Jason Lee   Spike Lee   Lee Majors  his Mom. He chats about hanging with Jonathan Ross in NYC, meeting Cyndi Lauper, and that good pal Grace Helbig is part of Kevin Pereira’s leetUP tour. News includes: RIP Joe Kubert, Kelly Sue DeConnick and Stefano Caselli take over Avengers Assemble, a super crossover from DC Comics with Superman, Superboy and Supergirl, Dennis Stashwick and Dennis Calero getClandestine at SyFy and a long out of print Andrew Loomis book is back. As always, listener feedback, Top 3 and more! Leave your iTunes comments! 5 stars and nothing but love!

This week is a time to celebrate and reflect as the show celebrates it’s six year anniversary! I will talk about some recent comic news, upcoming plans for the show and recount some of my favorite moments and shows from the past six years. Enjoy!

This week on the most eventful live comics radio program, we are joined by illustrator extraordinaire, Adam Kubert. Adam is, of course best known for his vast body of work at Marvel and DC, having worked on such characters as Wolverine, Incredible Hulk, Ultimate X-Men and Ghost Rider. His next project is finishing the last handful of issues of Marvel’s current event title; Avengers Vs. X-Men. He joins us this week to chat about his work, past present and future and also about learning the business from his father and passing that knowledge along to future generations at the Kubert School.

Plus!: This week on ‘Shit Comics Reviewers Say’; We picked up He-Man and the Masters of the Universe #1 and AvX #7 from Strange Adventures and tonight they get the review treatment.

Well, we already tackled the underappreciated talents in comics, so now it’s only natural that we discuss… THE COMPLETELY OVERRATED TALENTS IN COMICS!!

Join hosts Scott H. Gardner and Michael R. Bailey, along with guests Jose Rivera and Chris Honeywell, for a fun and (mostly) light-hearted discussion (with a peppering of good ol’ fashioned fanboy ranting) of some of the most overblown, overhyped, and overinflated comic book writers and artists EVER.  Who makes the list?  Listen to find out, lazyass!!

Join Michael and Scott every Friday for
“Tales of the Justice Society of America“!! “!!

“Death and the Acrid Smell of Gunsmoke” — The Jonah Hex Podcast

In this fourth episode, Scott dives into the mailbag to address some listener feedback.

And then it’s on to the main event in the first issue of the title that’ll be Jonah’s new home for the next little while — Weird Western Tales #12 — and the heart-rending story entitled “Promise To A Princess“.  Bring a hankey, folks.  This one’s a real tear-jerker.

What’s so sad about it?  Listen in to find out as we continue exploring the weird and thrilling tales of the baddest bad-ass bounty hunter ever to roam the Old West…

Thank you for listening and come back every Thursday for more of “Death and the Acrid Smell of Gunsmoke: The Jonah Hex Podcast”

Feedback for this program may be sent to: jonahhexpodcast@gmail.com

Contest at the end? Perhaps 😉

Curt Swan was born on February 17, 1920 (NOTE: I mistakenly said 1910). To honor his birthday this year I want to share some of their thoughts on working with Curt Swan, as recorded in Eddy Zeno’s book, CURT SWAN: A LIFE IN COMICS. The comic pros mentioned here are Mort Walker, Murphy Anderson, Carmine Infantino, Julius Schwartz, Sheldon Moldoff, Elliot S! Maggin (no typo), Len Wein, Mark Waid and Joe Kubert.

SUPERMAN FAN PODCASTis a proud member of the LEAGUE OF COMIC BOOK PODCASTERS at http://www.comicbooknoise.com/league and the COMICS PODCAST NETWORK! http://www.comicspodcasts.com/.

Superman and all related characters are trademark and copyright DC Comics.