Gather round, as we go back in time to August 18, 2010. Yup, exactly six years ago to the day. Before Avengers was a movie, before The New 52, before Brent was married, and before Ian owned a smartphone. In this never before released episode, Juan de Jesus returns from a long hiatus, which is now even longer, to join Brent and Ian to review the Batman: Under the Red Hood animated movie, followed by some thoughts on Scott Pilgrim vs. The World and why it flopped at the box office. Time flies when you completely forget an episode exists! But this is classic Comic Timing goodness, that’s for sure. Dig in, and reminisce on days gone by.

You can e-mail the show at comictiming@gmail.com and be sure to Like us on Facebook at http://www.facebook.com/ComicTiming. Be sure to follow Ian on Twitter @i_am_scifi, or on Tumblr at heehaw-ds9.tumblr.com; Brent is on Twitter too @kossinab. And if you want to find out what Juan has been up to lately, check out his work over at ReviewFix, or follow him on Twitter @DaNerdyPugilist.

Episode 14: Jim and Eric talk a little behind the scenes of their Evine Live television “performance” and struggle with the ground rules of the Convergence Event.  They seem pretty positive in general, but of course find a bunch of things to bitch about.

Watch the EVINE Live television clip of us HERE

Send all listener mail to weirdsciencedccomics@gmail.com and remember, we will read everything!

DC comics published Knightfall in 1993 in Batman and Detective Comics. This story is one of the most famous Batman stories and we were excited to read and discuss this. In this episode, we talk about the key players (Batman, Bane, Robin, and Azrael) as well as the choices the writers made in telling the story. 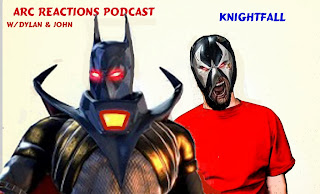 Our next podcast will be  November 3rd and it will be part 2 of Knightfall.

Supanova isn’t far now. VERY exciting stuff! And another long one today to let’s get to it….

Bow down to Nintendo Xbox and PS fanboys

Chopper IS a great film

Pat Benatar is too metal for our crew

Under rated supernatural beings in movies

James Gandolfini R.I.P. and bow down to the Sopranos

The Last of Us – Review (very slight spoilers)

Robert Downey Jr officially signed on for Avengers 2 and 3

Despite not being good at numbers and telling the world that this was episode 130, this i actually episode 129, which starts the show off telling you about the numerous things that Kevin will be wrong about. TJ has anger towards those that make fun of people yet show their ignorance in the process, and Margaret has a shitty boss. We learn that while some may not actually have a prick, they can still be a prick. Flashpoint kicked all sorts of ass and if you do not agree with that statement then go read something else. Batman and Robin is getting better and better and Jason Todd is only allowed one writer. Cassie Hack shows her naughty bits, and Chuck Dixon writes like a five year old. All this and more in a very entertaining F BombCast. Enjoy!

an iTunes review would be extra sexy.

Get the show on iTunes, Zune, at http://www.fbombcast.com or this little guy right here:

This week, our panel examines a move by Heath Ledger fans to remove The Joker from all future Batman films, reviews Batman #686 by Neil Gaiman and Andy Kubert, debates the continuing corruption of Mary Marvel and whether Barbara Gordon should return as Batgirl, considers the death and return of Barry Allen, Captain America & Jason Todd before an all out interview with Ross about nearly all of his projects to date, including the first word on what his next project might be…

You can download this episode and high quality versions of all of the Comics on Comics video podcasts for free on iTunes.