Join the Grawlix Podcast and Grawlix Cinematic Universe for a game of “We’re All Going to Die”, a single page tabletop game, on this special Halloween Actual Play RPG episode! The rules are light and the tone is lighter. The only thing we know for sure is just one player can survive. Enjoy!

We’re All Going To Die: A Single Page RPG

On this year’s Halloween episode the boys brave the airwaves alone! Randy and Jesse ponder their Suicide Squad apathy, discuss Scott Pilgrim Vol. 1, pitch their ideal horror comics, and realize Melanie is the show’s anchor. In the recently returned Recent Reads segment Jesse proclaims you’ve got to have Faith and Randy confesses his current favorite Bat-book is the Batman lite Detective Comics. Enjoy!

This episode originally appeared on http://www.grawlixpodcast.com/2016/10/grawlix33.html

Brimstone and the Borderhounds follows the titular character as he leads his band of bounty hunters working for the Hell corporation. The group gets set up by a mysterious villain trying to destroy Brimstone. Does that villain succeed? Will the Borderhounds live to fight another day? Listen to the episode and find out. 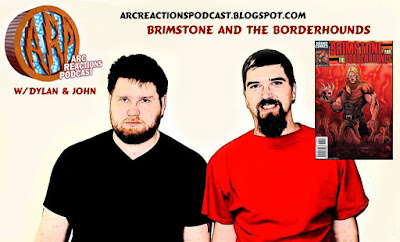 Our next episodes will be Bat Books For Beginners – Episode 131: Huntress – Cry For Blood on June 16th.

And come back July 5th for our Death of Wolverine episode.

If you’re a slasher fan, you always wanted to see Freddy fight Jason, and if you craved more after that, there’s a comic out there that sprinkled Evil Dead into the mix. This Halloween, we tackle Freddy vs. Jason vs. Ash, and its sequel, subtitled: The Nightmare Warriors. So much fanservice.

To surprise all of you looking at the comic podcast network, We actually start the show talking about comics. Fraction’s Thor and Glass’s Thor are discussed as is Neil Diamond, as he should always be. X Men and Vampires are like Peanut Butter and Chocolate, and Fool me once shame on you Fool me seven times Same on me, Try it one last time, and you get Gold, IN his eighth attempt to try something by Rick Remender, Kevin is in love with Uncanny X-Force. The Khunds are coming, The Khunds are coming, Better get your tampons and pads ready. REBELS is talked about as is the New Freedom Fighters. and SLGs Royal Historian of OZ is talked about. Then the Horror, oh the Horror. Is Nightmare the Elm Street a slasher? We say no. Two quick insta fives are completed with best and Worst Horror Sequels.

Due to libsyn problems it is not on iTunes as of me typing that, but it is here and on http://www.fbombcast.com

Oh, the horror, the horror, quite literally actually. You get a full hour on the start of our month o’ horror. Hammer rules the day and Peter Cushing is a sexy motherfucker. We learn that raping zombies not only is NOT sexy, but also does not make a good entertaining movie, who knew. Corey Feldmen was meant to be Jason but someone thought that was a bad idea, and i call said person an asshole. Find out how kevin reveals his love of Mao and realizes that he is a full fledged member of the Communist party. Who is the Greatest Current DC Heroine (and not the type Speedy spikes). Brightest Day, Wolverine Weapon X, JLI: Generations Lost, and company wide crossovers are discussed.

PLEASE LEAVE US AN ITUNES REVIEW

get the show on iTunes, zune marketplace, www.fbombcast.com, or this cute little guy right below:

Comics on Comics proudly presents the second half of our most popular episode to date!

In this episode, our panel dissects X-men Origins: Wolverine with a spirited defense from Katz and takes a look back at Lindeolf’s Ultimate Wolverine vs. Hulk miniseries before tearing into the Watchmen movie, Hancock, Superman Returns and Freddy vs. Jason vs. Ash before the panel goes in-depth on Robert Kirkman’s incredibly popular zombie series, The Walking Dead!

You can watch a larger version of this episode online here.

Medium and high quality downloads of this episode and all of our previous episodes are available on iTunes.

If you want to see the first half of this episode, you can find it here!

Or you can watch all of our Video episodes online here.

Kevin wonders why i don’t listen to his suggestions but then suggest that we name episodes after something that is so briefly mentioned on the show that i sneezed this morning and missed it, Oh well i sort of listened this time. The three amigos are back together and it takes a while of idling for them to get their engines revved again. I am sort of out of it so lets see if the normal talk is discussed: 1) Genitals-Check 2)Cum-Check 3)poop-nope 3)meat-check 4)porn-check 5)movies-check 6)comics-check 7)Star Trek-nope. Comics Discussed are Walking Dead 1 and some sort of manga thing on his iPod Touch app. Warren Ellis’s X-Man series from around 2000 and JMS’s first Brave and the bold issue. Have fun folks and bear with us during those trying minutes. kthxbye!

Get it on iTunes, at http://www.fbombcast.com or download right now at this little slice of sexiness below.

Remakes are in fashion in Hollywood, and horror movies have not been spared.  Friday the 13th joins in on the fun, and TOtGU was there.  Hear all about it this week on Too Old to Grow Up!