Legion has gone mad, seduces his future mother, and plans to kill Magneto? Allen and Ryan wrap up their coverage of Legion Quest and discuss the end of the X-Men!? It’s time to make the chimichangas! Brent and Ian are joined by longtime friend of the show, and Supershow Episode veteran, Steve Katz, as they review the Rated R Superstar, Deadpool! Get ready for a pretty even-handed review of the film, as not everybody was completely thrilled with it. But some were! Two distinct opinions within with civil conversation throughout. Madness, right? Anywho, of course there’s madness! It’s Deadpool! And oh, spoilers, because duh. Then, the episode concludes with some quick talk about DC’s upcoming Rebirth.

Stay tuned in the upcoming weeks for information on our Patreon, which should be launching real soon. If you want to support Comic Timing and help keep it going for years to come, that’s one of the many ways you can do so. You can e-mail the show at comictiming@gmail.com and be sure to Like us on Facebook at http://www.facebook.com/ComicTiming. You can follow Ian on Twitter @i_am_scifi, or on Tumblr at heehaw-ds9.tumblr.com; Brent is on Twitter too @kossinab. And check out Steve’s movie reviews at his website, The Alpha Primitive.

Shortly before the final New 52 titles came out, we were joined by Fabian Nicieza and Ron Marz to talk their upcoming books for DC. Unfortunately that episode was lost to the sands of time and the whims of Libsyn. Now it’s back!

Do you feel like Partying? Then call this episode 100, feeling slightly tired and wish Episode 100 was another week, you are in luck cause you can say it is Episode 96. We learn Many Things in this episode that  are pertinent to the survival of our society, such as ummm…well…ahhhhhh.. yeah i was on the show and just finished listening to it and barely remember what the hell we spoke about. All i know is it was a party and all of you are invited. Me and Kev go over our top five brutal scenes in Film (cause someone needs more than a one day reminder). We here about a super shitty SciFi movie, and learn what Mike doesn’t like about the newest Dr. Who. Comic talk is represented with a great talk on Red Robin and Booster Gold. We go over the hatred that is One Moment in Time. TJ Gets slightly confused on Reading Korean Manga because it reads Correctly. Also some Hatred spewed at a Breast Cancer Research Charity and at Robert Kirkman.

Get it on iTunes, Zune market place or at Http://www.fbombcast.com

Or you can play or download it right here: 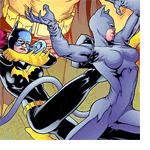 We review Fabian Nicieza and Kevin Maguire’s The Cat and The Bat. Music by Legbone, Black Wolf Fight and Q-Tip.