It’s Super Hero Speak’s first international episode! This week Dave sits down with Stuart Jennett and Darren Pearce from the U.K. and they talk all about their new book Elena: Divinity Rising. Also Dave learns about how comics differ in the United Kingdom from the U.S. Darren is a new comer to the comics scene, where Stuart is a long time vet having worked for Marvel U.K. and had much success with his series Chronos Commandos. So take a look into Elena: Divinity rising with us and enjoy! 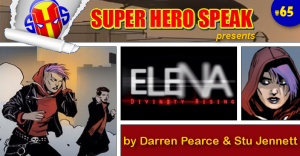 #stumpthegeekspeak question of last week: Which DC hero, introduced in 1961, got his powers when he accidentally drank bottle of super plastic formula, he thought was soda?

And the winner is Mark Howden! Congrats you are the geek of the week! Follow Mark on twitter here: https://twitter.com/GreaserCanada

#stumpthegeekspeak question of the week: In the before Watchmen books it was revealed the 2 of the Minutemen had a sexual relationship. Which 2 was it?

Looking to decorate your child’s room, home office or man cave? Check out fatheads and support this podcast!

How did the Catwoman manage to abscond with the Crown Jewels of England? Can Batman solve the case? Find out in this exciting episode of The Batman Adventures, hosted by Scott H. Gardner!!

Feedback for this show may be sent to twotruefreaks@gmail.com, subject-line “The Batman Adventures”