Comic News Insider: Episode 698 is now available for free download! Click on the link or get it through iTunes! Sponsored by Dynamic Forces.

The last of the Heroes Con interviews are upon us! Jimmy sat down with Brenden Fletcher for a long overdue interview about his work on Gotham Academy, Batgirl, Black Canary and more. Jimmy’s old friend Rebecca joins him in studio in the rotating co-host chair and they have a lengthy (sorry) discussion about that Game of Thrones finale. They discuss a PR email and Jimmy is ecstatic over a Steranko tweet to him. News includes: Cerebus returns, Kick-Ass and Hit-Girl also return in comic book form, IDW is bringing us a new Star Trek anthology, the new Mortal Kombat film has cast 12 major roles, the second volume of the music of DC comics is coming, the 2016 NJ Superhero weekend at Comic Fusion is again holding their annual event in August. Leave your iTunes comments! 5 stars and nothing but love! Also, get a hold of us!

Buckle up, because Andy and Derek are back behind the wheel. On this week’s trip, they’re taking you down a road that includes three very different titles. They begin with Paul Dini and Eduardo Risso’s Dark Night: A True Batman Story (Vertigo Comics)…and yes, you did read correctly, the guys are discussing a book with “Batman” in its title. But while the Caped Crusader is a prominent part of the story, this isn’t a standard superhero narrative, but an autobiographical account of a traumatic event in Dini’s life. The guys discuss the manner of Dini’s narration, especially as it’s represented by Risso’s art. In fact, it’s the latter that consumes much of the conversation, as they highlight Risso’s diversity of style to reflect shifts in the storytelling.

Next they look at the first in a five-issue limited series from Howard Chaykin, Midnight of the Soul (Image Comics). This is a story that Chaykin has been wanting to tell for some time, and the guys are happy to see it

finally coming to fruition. It’s the tale of Joel, a wannabe writer who is emotionally scarred from the fighting in Germany during the closing days of World War II. In this first issue, Joel discovers that his wife is living a double life, and both Derek and Andy comment on the signature Chaykin elements in the story, including someone getting shot in the head in the middle of a blowjob. But there’s more than just sex and violence in this comic. As the guys reveal, they’re impressed by the tightly woven elements within the premise, the visual patterns and rhythms that Chaykin establishes at the outset, and in anticipation (they hope) of big narrative payoff.

Finally, the Two Guys wrap up with a recent publication from Retrofit/Big Planet Comics, Sophie Franz’s The Experts. This is a short one-shot that blends horror with the fantastic. In the story, a group of individuals, the experts, are studying a mysterious group of aquatic humanoids while their experiences doing so are slowly pulling them apart. This is the first time either Derek or Andy have encountered Franz’s art, but they like what they see and call it one of the most notable titles they’ve read this year. But then again, this is the kind of comic they have come to expect from Retrofit/Big Planet.

Comic News Insider: Episode 661 is now available for free download! Click on the link or get it through iTunes! Sponsored by Dynamic Forces.

Emmy Potter returns to co-hosting duties! So of course, she and Jimmy have to chat Doctor Who and their love of Peter Capaldi. They also chat about the Peter Jackson/Doctor Who video tease as well as the new trailer for Captain America: Civil War (#TeamCaptainAmerica). News includes: Paul Dini and Eduardo Risso will be the creative forces behind a new 121 page graphic novel called Dark Night: A True Batman Story from DC/Vertigo, CBS picks up Supergirl for a full season and R2-KT may appear in the upcoming Star Wars film. Leave your iTunes comments! 5 stars and nothing but love! Also, get a hold of us!

This month’s Trade Your Pick selection is 100 Bullets Vol. 8: The Hard Way TP. As always I do a detailed review of the book and talk all things surrounding it. Enjoy!

Only 3 episodes of the weekly video reviews remain!

This week the Wednesday Warriors review Captain America the movie. Did they believe it followed Thor’s greatness or should it have been shot before being drafted into the military. Find out in this exciting episode that also has Batman surprises and kung-fu action. 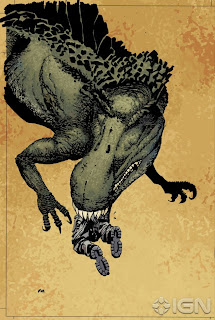 An e-mail, a reminder and then comic talk as I review the latest in the JP Saga and look back at the masterpeice which is 100 Bullets.

Also, Mr. Sandquist returns with The Sandbox to talk about The Veil and Fishtown.
Download