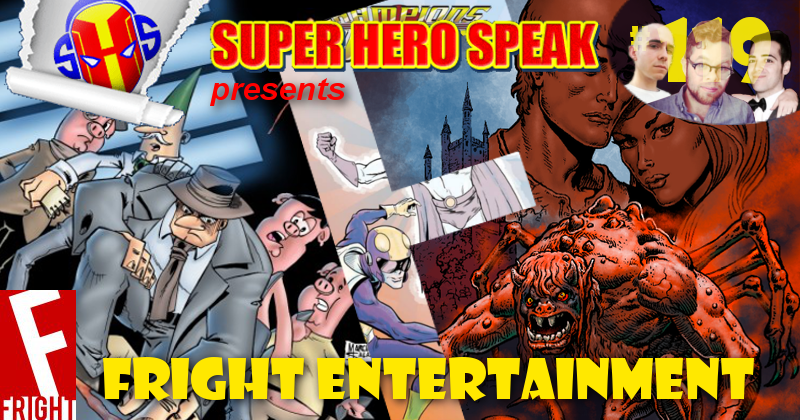 forget Don’t forget to check us out at the Philly Podcast Festival: http://www.phillypodfest.com/

This week Dave sits down Alex Banchitta and  James Riccardo the creative minds behind Fright Entertainment’s Champions of Earth. Have you ever wondered what Batman would be like if his parent’s weren’t killed? Or how Spider-man would have turned out if Uncle Ben was never killed and Peter never learned “With great power comes great responsibility”? Well that pretty much sums up Champions of Earth. They take the classic superhero story and turn it on it’s ear. If you love some comedy mixed in with your heroes you should definitely check out and support Champions of Earth! 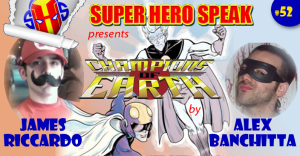 Normally we would write something “clever” here, but instead we would like to use this space to promote our new love of albino ferrets! Boy they are aweome. Fear not, we still have time to check out comics.

It looks like the gang have a new sponsor for their show which opens the show, before the Weiners talk about their light week of comics. Very few comics, but very good comics! But they cannot help getting way off topic every possible chance . . .

Please Note: The “Atom” Heroclix we are talking about on the show is from the DC Origin set, in which the arm was poorly placed/attached and often fell off off before you even opened the package.
Direct download: Burnt_Weiners_Episode_070_-_Fables_TPB_15_-_Sigil_2_-_DD_6.mp3

Episode 103
With one bomber having audio troubles and another going to a dinner with celebrities, the f bombcast needed to run a repeat this week. The Full Monty Folks, Here and Waving our geek Flag proudly. Psst, Did you know there was a thing called Breast Cancer? If not let me just say WooHoo I just raised your awareness. A discussion of the direction of DC comics post Blackest Night as well as about event burnout in general. A bunch a really good movies are discussed: The Kite Runner, Battlestar Galactica: The Plan, Some Dungeons and Dragons Flick Mike watched, Drag Me to Hell, A Haunting in Connecticut. Then the boys get all philosophical on two movies that really no one should ever get philosophical about ever: Doomsday and They Live. The Musical INfatuation lives as we hear a god awful indie song by Kevin but since it is about Steve McQueen it automatically becomes cool, Kamelot from Mike, and Dream Theater from TJ. Comics Round out this table of geekery with: Stumptown, House of Mystery, and Godland.
Music Played:
Eytan Mirsky: (I Just Wanna be) Your Steve McQueen • Was it Something I said
Kamelot: The Haunting (Somewhere in Time) • The Black Halo
Dream Theater: A Nightmare to Remember • Black Clouds & Silver Linings
Here are the links to our theme song and our outro:
Wednesday 13: I Love to Say Fuck • Bloodwork EP
Ben Folds: Rockin’ the Suburbs • Rockin’ the Suburbs
get the episode on iTunes, Zune market place, or at http://www.fbombcast.com
or get it right here:

The Backroom Comics crew descends on PAX, during which they speak with Marvel, The Amazing Society, Nintendo, Activision, Wizards of the Coast, and Mayfair Games. Let’s face it, summer is pretty much over, but there are still shows to go to and comic books to talk about. In this episode we hear about Star Wars Celebration V and Baltimore Comicon from the Duke. After that Dang and Duke talk about Star Wars: Legacy #50, Morning Glories #1, Marvel Universe vs The Punisher #1, Dungeons and Dragons #0, Amazing Spider-Man #640 and Ex Machina #50.

(FYI, this was our second episode recorded via Skype and we’re still working out the bugs. Apologies for the “canned” sound.)