Comic News Insider: Episode 800 is now available for free download! Click on the link or get it through iTunes! Sponsored by Dynamic Forces.

We didn’t think we’d be able to pull it off at the last minute, but we did it! It’s our big 800th episode live recording. Producer Joe comes down from upstate to help out as usual. Special guests: Michael Emerson, Erica Schultz, Jonathan Baylis and Slanty Eyed Mama (Kate Rigg/Lyris Hung)! And, of course, because it’s an anniversary episode, there is plenty of music! Many thanks to the CNI Chorus consisting of Sarah Goldrainer, Liz Pepe, Kristen French, Nicky Schmidlein and Emmy Potter.  Big ups to Hourglass Tavern for letting us hold the show there for the 4th time. Give them a visit if you’re in NYC. News includes: Drew Goddard will direct X-Force, Colin Trevorrow is not directing Star Wars IX anymore, Harley Quinn’s 25th anniversary will have her drawn onto classic Batman covers, Futurama returns as a radio play, the Doctor Who spin-off Class has officially been cancelled and the Guy Ritchie directed live-action Aladdin casts Billy Magnussen as Prince Anders (ugh).

Michael Emerson teases some of his upcoming work on Arrow, talks about his love of the classics and relays some interesting fan interactions. Erica Schultz tells us about her new work Twelve Devils Dancing and other projects. Jonathan Baylis gives the scoop on the new issue of So Buttons…, his autobio comic anthology. And Slanty Eyed Mama update us on what’s happening with them and give us an epic improv spoken word accompanied by violin performance!

Give it a listen and enjoy! On to 900! PLEASE DON’T STEAL THE AUDIO (or pictures) AND POST IT ELSEWHERE! JUST LINK TO THE COMIC NEWS INSIDER WEBSITE PLEASE!

So have you heard the news from Marvel lately? Edgar Wright left Ant-Man? Marvel is cancelling the Fantastic Four? Marvel blocking toy licensing for X-Men and Amazing Spider-man movie tie ins? Has Marvel lost their way?  Are they becoming the evil empire? Well the guys not only discussed these issues this week, they did it as the first ever Super Hero Speak debate! Hear Ben take the pro Marvel side and John take the con as they discuss these issues in depth. Take a listen and decide for yourself. Enjoy! 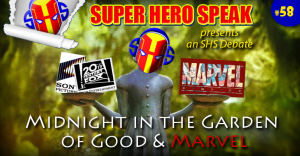 #stumpthegeekspeak question of the week: Who is the first major character to die in a Marvel comic? hint not a Timely comics title. To answer post on our FB page or tweet @SuperHeroSpeak #stumpthegeekspeak. A winner will be announced on the next episode. Please support the show by shopping at our Amazon store! Get all the great products you normally get from Amazon and support our podcast at the same time. Win, win: http://astore.amazon.com/supe03b-20 Follow us on Twitter: https://twitter.com/SuperHeroSpeak Like us and leave feed back on Facebook: https://www.facebook.com/Superherospeak

WHOA NELLY! Was this ever a messy one! I think there are some bits still worth listening to…. Mmmm…. Maybe not. How about you folks decide and get back to me.

People in Perth are always trying to “Get Ahead”!

Golf NEEDS to go away forever

George Carlin IS the best man to ever live

The white supremacist “Outed” on Trisha

–          Nightwing, Lex Luthor and Wonder Woman to appear in Batman Vs Superman

–          Why George A. Romero turned down directing episodes of The Walking Dead