The crew of Zone 4 returns for a brand new episode of the podcast!

Concluding my Power Records retrospective with legendary comic book artist/writer, Neal Adams! We’re chatting about Star Trek, Batman, Superman, and more. Plus – Neal weighs in on current comic book movies and TV shows!
http://comicbookcentral.net
Subscribe to the show in iTunes
Subscribe to the show on Blubrry
Listen to the show via Stitcher
“Like” Comic Book Central on Facebook
Follow Comic Book Central on Twitter
email: joe@comicbookcentral.net

Whether Earth-616, Ultimate, Pre-Crisis, Post-Crisis, Golden Age, Bronze, Silver or Modern… continuity is often a considered a focal point regarding shared universes. At the end of the day, though… does it matter all that much in the long run? The 1994 release of Marvels took comics by storm. The four-issue miniseries established the places of both hyperrealistic painter Alex Ross and continuity maven Kurt Busiek in the industry. There’s still plenty here to make it a standout story 16 years later, but has some of the shine come off? And, is making a logical narrative out of a mainstream comic companies’ disparate series really doable? Tim and Kumar discuss.

Also, Patrik W resurfaces to talk with Tim about the upcoming American Comics Exhibition in Tokyo. Tim, Patrik, and 13 other artists will be displaying their work! 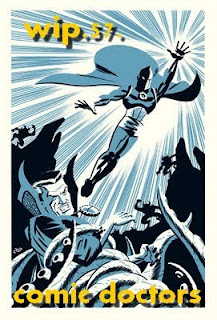 In this episode, hosts Michael Bailey and Scott H. Gardner take an in-depth look at the 1976 return of the Justice Society of America in the pages of their original title — All-Star Comics!! Specifically, they review issue #58, also deliver a bit of JSA news, character spotlight Power Girl, and wrap the whole thing up with a hilarious discussion of the classic comic book ads found in this issue — such as Hostess Fruit Pies, The Six Million Dollar Man Action Figure, and the Evel Knievel Stunt Cycle!!