This week we bring you part one of our 2018 Great Philly Comic Con coverage. The guys talk about what the show was like this year, and how they feel about the con’s growth. The also bring you interviews with Frank Gogol (Grief), Andy Schmidt (Comics Experience) and David Bradley (Harry Potter, Game of Thrones, Doctor Who). So please sit back and enjoy this jam packed episode from the Great Philadelphia Comic Con 2018! 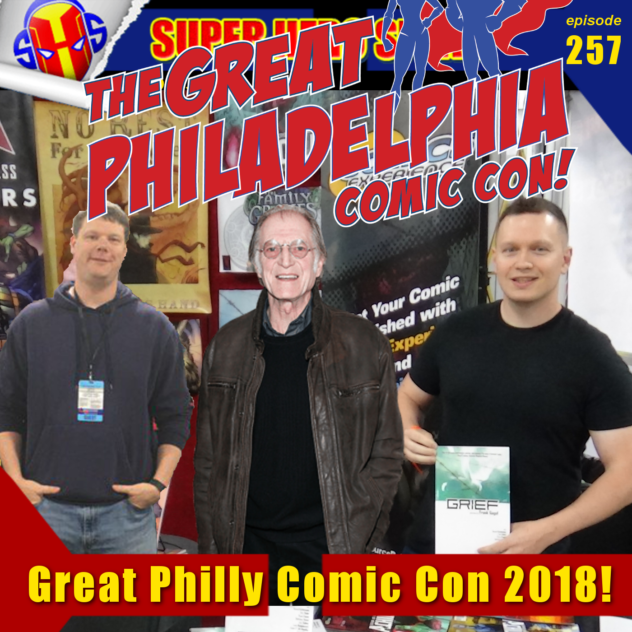 So you think nothing more can be done with superheroes? Well, Indie comics creator Jon Santana is here during episode 299 to change your mind on that one! Jon’s writing shines in his creations Jaded, Wordsmith, Everhounds and Bejaded, a webcomic based loosely on Jaded. We talk about his realistic take on superheroes in Jaded, and some of what we can expect as this high-octane miniseries concludes with the final two of six issues. You’ll also want to learn about the other projects he has coming, so don’t miss it! To access these books, be sure to go to Jon’s website at this link or check out Drive Thru Comics or at this link at comixology!  Jon can write everything from serious drama to comedy, so you’ll enjoy what he has to say! Next time, landmark episode 300!

This month, they discuss their new pirate book from writer Nancy Hansen, JEZEBEL JOHNSON, QUEEN OF ANARCHY! They also talk about what pulp categories are not en vogue these days, and who they see as the best new pulp hero out there.

This and much more!

Ready to visit the front lines of the comics industry? In this week’s episode, #263, I talk with Dave Romeo, the owner and operator of Comics on the Green, a high-power comics shop that’s been a standard setter for the industry since Dave opened it over two decades ago! Dave understands both the business and fan aspects of comics, so we talk about everything from how 2016 went in his shop to what he envisions taking place in 2017. We discuss comics companies including Marvel, DC, Image and AfterShock, as well as the impact of comics-related moves and TV shows on local stores, among other fascinating things! The store’s website is at this link, and you can also find out more by checking out their Facebook page and keeping up with them on Twitter. Don’t miss this entertaining and informative interview!

It is not often that a comic event comes that redefines a title, a publisher, or a universe.  Events in the comic book world often equate to highly publicized ways to reboot a series without stopping any continuity.  However, not all crossover events are used as reboots, and one stands above all others as a shining example of a major crossover event that actually holds some ongoing and lasting importance to the characters and creators of the comic book universe.  That crossover event is CIVIL WAR, the Marvel crossover that shook the very foundations of 60 plus years of Marvel history and redefined the rules of the universe for the characters within.

READ: Want our take on a different civil war? Check out our analysis of CAPTAIN AMERICA: CIVIL WAR!

The main event was written by Mark Millar, but, as major crossovers go, the full event spanned nearly every ongoing title that Marvel had at the time, so to call it anything less than a team effort is to exclude a lot of deserving creators.  There was something for everyone, and every character had their own chapter in the saga.

While we did choose this event for a podcast because of its excellence, we also chose it because of how topical it is right now in the world of Marvel Comics. In Marvel’s recent SECRET WARS event, we got the chance to explore the possible alternate history that might have come about had this event not ended in the way it had.  CIVIL WAR II will also be happening in the upcoming months, once again pitting hero against hero over a new moral dilemma, making the original all the more important, and the most highly public version of this story, however, is without a doubt CAPTAIN AMERICA: CIVIL WAR, which adapted elements of this story for the big screen.

By the way, since the podcast was recorded prior to the release of the movie, there’s plenty of speculation about what might occur in the film’s runtime.  Enjoy seeing what we got right and wrong, and follow along with us as we explore one of the most divisive comic book events ever written: Marvel’s CIVIL WAR!

What makes a hero? That’s just one of the topics I discuss with Indie comics creator Jon Santana during episode 228! Jon’s writing shines in his creations Jaded, Wordsmith, Everhounds and Bejaded, a webcomic based loosely on Jaded. We talk about his realistic take on superheroes in Jaded, and some of what we can expect as this high-octane miniseries concludes with the final three of six issues. You’ll also want to learn about the other projects he has coming, so don’t miss it! To access these books, be sure to go to Jon’s website at this link or check out Drive Thru Comics. Stay tuned for news about comixology and national distribution of the book in local shops, too!  Jon can write everything from serious drama to comedy, so you’ll enjoy what he has to say!

The Frontline crew is half mast this episode, but they make the best of it discussing the latest news, Top 5 picks, worst picks, plus a lengthy discussion on the new Power Rangers costumes.

Want to hear their thoughts on Captain America: Civil War? Check out the latest episode of Media Madness below, and tune in the first or second week of June for a brand new episode of Zone 4!

The Avengers have split in Captain America: Civil War. Which side will win? Who do you support? Join us as we talk about the things we like and what we didn’t like about this Marvel film. 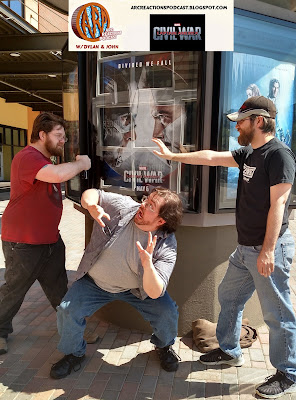 Our next episode will be Bat Books For Beginners 142 – Bruce Wayne, Muderer? on May 17th.

The Zone 4 crew returns for another monthly dose of comic and related media goodness!

In honor of May the 4th earlier this week, we finally discuss Star Wars: The Force Awakens!

But before we do that, we talk some news – mostly about Star Wars. We also discuss several books we’re currently reading, The Flash TV show, a couple of non-comic TV shows we’re watching, and more!

Super stuntwoman Heidi Moneymaker joins me in the Lair this week to talk about working with Sly and Tom Cruise, performing wild west stunts with the Lone Ranger, sci-fi stunts in the world of Star Trek…and teaming up with Scarlett Johansson to bring Black Widow to life in the Marvel movie universe!
http://comicbookcentral.net
‪Subscribe to the show in iTunes
Subscribe to the show on Blubrry
Listen to the show via Stitcher
“Like” Comic Book Central on Facebook
Follow Comic Book Central on Twitter
email: joe@comicbookcentral.net

The Frontline crew returns with another week of Top 5 picks, comic news discussion, Civil War II talk, and much more!

In this episode we review Marvel Comics Secret Wars books books of October 2015.